Much of my recent research applies modern tools for nonlinear time series analysis to long-term ecological monitoring data to gain a better a understanding of how population dynamics and species interactions vary naturally over time and space.
Spatio-Temporal Variation in Species Interactions / Trophic Control
My collaborators and I used empirical dynamic modeling to explore temporal variation in top-down and bottom-up interaction strength between phytoplankton and zooplankton across 13 globally-distributed lakes. We document relationships between tropic control, nutrient loading, and seasonality. This work was published in Ecology Letters.
Spatial Variation in Population Dynamics - What de-synchronizes meta-populations?
Many meta-populations are less synchronous than theory would predict, and it's often unclear whether this is due to dissimilar local dynamics, or similar local dynamics driven by disparate environmental conditions. Using blue crabs as a case study, Dr. Stephan Munch and I present a hierarchical delay embedding framework which can help differentiate among the possible mechanisms that decorrelate population trajectories. More generally, this methodology can provide insight into the spatial structure of population dynamics. This work was published in PNAS.
Multispecies Forecasting and Ecosystem Management
I am working with Dr. Stephan Munch on the estimation of multispecies interactions from observational time series data for use in ecosystem-based management. We are also working on methodologies to improve forecasts of recruitment and the abundance of short-lived marine species, with the hope of improving stock assessment models. 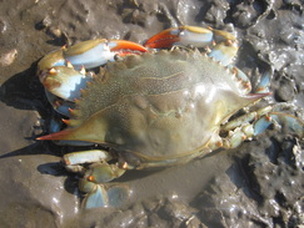 Spatial Variability in Blue Crab Population Dynamics and Species Interactions
For my dissertation, I worked with Dr. David Kimbro at the Northeastern University Marine Science Center to study drivers of blue crab (Callinectes sapidus) distribution and abundance across the U.S. Atlantic coast. The blue crab is an important fishery species throughout this region. I researched the temperature-dependency of interactions between blue crabs and co-occurring invasive green crabs (Carcinus maenas); spatial variability in blue crab meta-population dynamics; and the potential for changes in blue crab distribution and abundance under climate change.  To address these questions, I used a combination of field surveys, lab experiments, dynamical modeling, and statistical modeling. I collaborated closely with Dr. Tarik Gouhier (Northeastern). My chapter on blue crab-green crab interactions was published in Ecology. 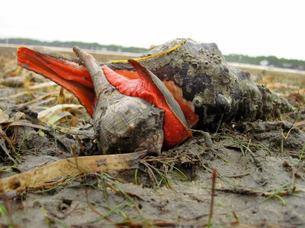 Historical Diversity Changes in an Intertidal Seagrass Bed
While working at Florida State University, I researched the consequences of historical changes in diversity at multiple trophic levels in the Bay Mouth Bar seagrass bed on the north Gulf Coast of Florida. Bay Mouth Bar has an especially diverse assemblage of large predatory gastropods, which the ecologist Robert T. Paine surveyed and described in the late 1950's. Re-visiting and re-surveying this site in 2013, Dr. Kimbro and I observed that the area of the seagrass bed had declined by 80% since 1959 due to changes in sediment deposition. This habitat loss coincided with the disappearance of two species of large predatory snails, and a decline in the relative abundance of specialist relative to generalist gastropods. To investigate the effects of these compositional changes, we experimentally examined trophic interactions among community members in mimicked current and historical food webs.  Our results suggest that the community not only experienced a reduction in the number of interaction pathways due to species loss, but also loss of the strongest top-down effects among trophic levels. This work was published in Marine Ecology Progress Series. 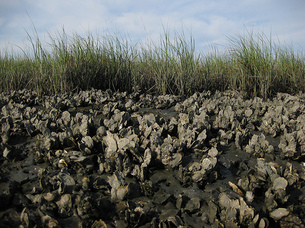 Biogeography of Species Interactions on Oyster Reefs
Before grad school I worked as a research technician and lab manager for Dr. Kimbro at the Florida State University Coastal & Marine Lab, primarily on a collaborative biogeographic study examining linkages between predator effects and ecosystem functioning on oyster reefs. I helped to organize and conduct large-scale oyster reef surveys and field experiments examining trophic interactions across the Southeast. While working on this project, I discovered some interesting patterns in the infection prevalence of oyster pea crabs in outplanted juvenile oysters. These observations lead to co-authorship of a paper on the biogeography of hosts and parasites, published in Oecologia. 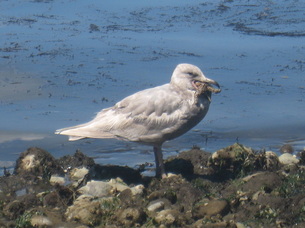 Distribution of Sea Stars in Puget Sound - Avian Predation and Interspecific Competition
My undergraduate thesis at the University of Puget Sound examined the distribution patterns of two ecologically important intertidal sea star species (Pisaster ochraceus and Evasterias troschelii) among five habitat types in Puget Sound and the San Juan Islands. Dr. Joel Elliott and I found that exposed small sea stars of both species were highly vulnerable to predation by gulls, and that small sea stars appear to use structurally complex crevice microhabitat as a predation refuge. Large sea stars, once attaining a size refuge from predation, appear to migrate to more exposed habitat types with more abundant food resources. This work was published in Marine Biology. Dr. Elliott and I also documented size-dependent interference behaviors among the two focal sea star species, which was published in Marine Ecology Progress Series. This research, conducted before the onset of sea star wasting disease, is now of particular relevance. 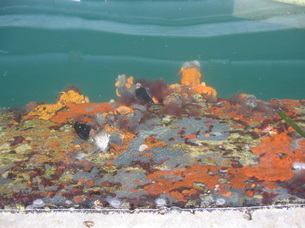 Biotic Resistance in Benthic Invertebrate Communities
As an REU intern at Bodega Marine Lab, I conducted research with Dr. Jay Stachowicz and Jarrett Byrnes on the ability of native predators to biotically resist invasion in benthic invertebrate communities. We found that many mobile species, particularly sea stars, crabs, and chitons, consume non-native sessile invertebrates, and these mobile species were more abundant and diverse in the rocky subtidal than in fouling communities. In a field experiment, we found that non-native sessile invertebrates survived when transplanted to the rocky subtidal, but only when cages excluded benthic predators. Our results suggest that in this area, predation by native  consumers contributes to the dominance of non-native sessile invertebrates in fouling communities and the relative absence of these species from the rocky subtidal. This work was published in Marine Ecology Progress Series. ​
Other Projects
In 2017, with funding from the NSF GRIP program, I worked for several months at the NOAA Southwest Fishery Science Center with the Salmon Ocean Ecology group. I used structural equation models (SEM) and time series models to examine the direct and indirect effects of YOY rockfish abundance on chinook salmon survival.
I have also worked as a research assistant at Friday Harbor Laboratories in Washington and at the Smithsonian Tropical Research Institute in Panama. While studying abroad in Australia, I conducted an independent study project at the Lizard Island Research Station on the Great Barrier Reef in Australia. This project examined the potential of corallivorous reefs fishes to transmit coral disease.
Outside the Quadrat